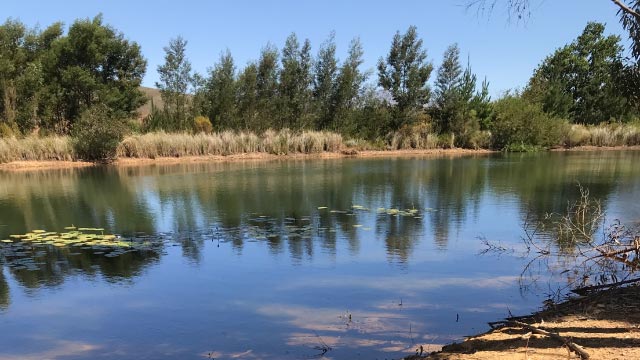 The Farm Goedvertrouw was acquired by the present owners from Petrus Johannes Fourie in November 1984, who acquired the farm from the Punt family who are still in the Botriver valley.

Arthur Henry Pillmann, a retired Mechanical Engineer and his newly wed wife, Elreda, settled on the farm with the aim of building a life together which would include Arthur’s passion to produce a world class “Bordeaux-style” wine on the farm. Elreda who grew up on a bushveld farm in the Northern Province and later distinguished herself as a chief theatre sister at the then HF Verwoerd Hospital, moved to the newly built City Park/Chris Barnard hospital and then packed her belongings and joined Arthur in support of the dream.

Amidst the passion to develop vineyards and setup a cellar, Arthur in his spare time restored a BMW 328 1939 Roadster, one of only six restored in the world at that time. To allow him to enjoy his hobby and to be close to him, Elreda allowed Arthur to set-up a “workshop” inside the farmhouse. This made for very interesting discussions when the tools were not co-operating in the manner the Engineer required them to do.

They planted Pinot Noir, Cabernet, Sauvignon blanc and Chardonnay rootstocks after ripping approximately 6 hectares of virgin sandstone land on a rather steep 7-degree, eastern facing slope. This was later followed by another 1.5 hectares in flatter 3-degree eastern sloping shale slopes. The first wines were harvested during the summer of 1988 and they registered as a Wine Estate in 1989.

Elreda, being a bushveld girl, loves bushveld trees and with her green fingers have managed to grow several trees, more likely to be seen in other provinces of the country, most notably the Weeping Boer-bean orHuilboerboon (Schotia brachypetala) found at the entrance to her house. She also maintains a lovely English country garden with a variety of flowers which are pleasing on the eye all year round.

Being very handy in fixing machines Arthur also acquired and fixed an old second hand D6 Bulldozer which he used to build several dams on the farm. Again, this caused for fun and games as Arthur once ended up stuck in one of the dams with Elias (the trusty farmhand, who moved with them to the farm) having to recover the dozer and Arthur from the dam with the tractor. Elias was very upset with Arthur being so irresponsible and clearly warned that he will not recover him or the dozer again.

Arthur passed away in November 2002 and ever since Elreda have been managing the responsibilities of the vineyards and other farming activities with a handful of labourers who are related to Elias.