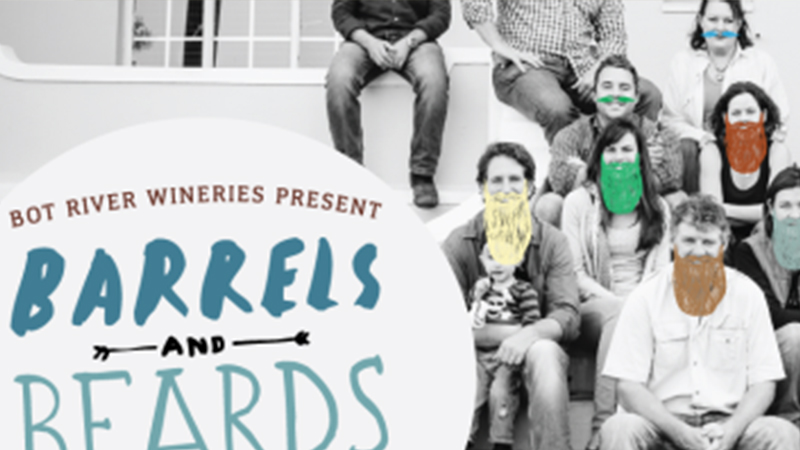 Barrels & Beards Harvest Celebration 2015 : Make a weekend of it!

Delight in a weekend filled with bold wines, raging beards and genuine hospitality when the wine community of Bot River in the Overberg celebrates their harvest with a trio of unique events, culminating with their signature Barrels & Beards showdown on Saturday, 18 April 2015.

Your expedition into the laager of this winemaking clan kicks off with a laid-back, sunset session on the ‘stoep’ of the legendary Bot River Hotel on Friday evening, 17 April.

One can ease into the weekend a la Bot River style and mingle with the locals over a few beers, and then amble over to the rustic Shuntin’ Shed for wood-fired pizzas ‘on the tracks’. The winemakers will be there in their bearded glory, so be sure to grab a seat next to one to find out what makes Bot River tick.

Saturday morning, 18 April, tempts the more serious winos and cellar buffs to attend a Best of Bot River Tasting at Luddite Wines, owned by affable winemakers Niels and Penny Verburg. During this enlightening tasting, a selection of terroir-driven Bot River wines will be ‘blind tasted’ against international wines of the highest standards ranging from rare Rhône vintages to New World gems.

The weekend concludes with the ever-popular Bot River Barrels & Beards post-harvest celebration when the winemakers’ self-imposed shaving ban (which starts on 1 February 2015 and lasts throughout the entire harvesting period) ends on a high and hairy note at the family-run Beaumont Estate on Saturday evening, 18 April.

At this annual celebration of good food, wine and company the winemakers flaunt their facial fur and wacky whiskers during an amusing ‘beard parade’ when the boldest beard in Bot River is crowned by esteemed judges – who take their job very seriously.

A new addition to this year’s hairy hullabaloo will be the launch of an exclusive Bot River Auction Reserve 2013 wine, which will be auctioned off on the evening. For one night only, guests will have the opportunity to get their hands on this premium red blend, made with only the finest grapes from the Bot River area, with proceeds going towards paying for an extra teacher for Bot River Primary School. Only 100 magnums and 300 750ml bottles will be produced to go under the hammer.

Besides a chance to get your piece of this Limited Release action, the Bot River Barrels & Beards 2015 party includes complimentary barrel tastings of the latest wines, a hearty farm-to-fork dinner and music entertainment led by a lively marimba band. Wines will be on sale on the evening.

Bot River, a mere hour’s drive from Cape Town, has long been a haven for wine industry pioneers and mavericks, with 13 wine farms (most of them family-run) producing world class wines. This quaint 10 km enclave is known for its conservation initiatives, a ‘chilled’ approach to life and honest, hands-on winemaking methods.

Tickets are (very) limited, so quick! Send an email to nicolene@botriverwines.co.za