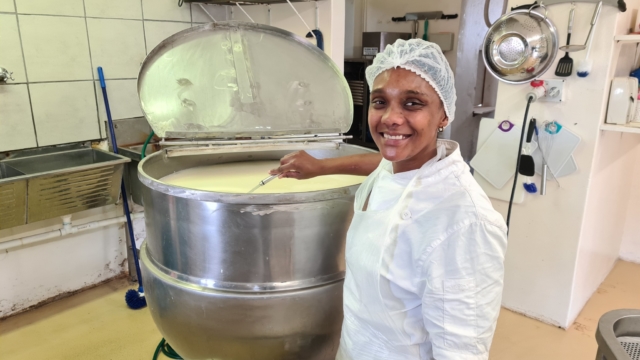 Jackie grew up on Vrede, the farm next to Anysbos Fourth child of Willem and Cornelia Davids. Her mother calls her Suzette but we, and the whole valley, call her Jackie.

Her life changed when she fell pregnant at the age of sixteen and still at school. The father of the child, Ashley, was working for us then. And she moved in with him. Assie, real name Lee Ashmin, was born in 2010. She was seventeen.

One day she asked me (Johan) if she could do the washing and scrubbing in the little cheesery that we started. The child and endless kakadoeke and loneliness were getting to her.

So, she started. Washing, cleaning and scrubbing. And earning a bit of money. And let her mother looked after Assie. One day I caught her, if that’s the right word, reading the recipes in the folder. She was interested. She wanted to learn to make cheese.

The rest is history. Two years later she won a scholarship to go Burgundy in France to do a course in cheesemaking. And she came back and made herself indispensable.

But then Ashley decided to leave. And he took his woman and our cheesemaker with him. It was a disaster. I thought of getting rid of the goats and stop making cheese. We limped on. Things were getting really bad. And then I got a message from Jackie. ‘Can I come back? I lie awake in the night. I miss my job and I miss my people’.

Willem and Cornelia and I picked her up at the Somerset West Station. She came back. That was seven years ago. She found love again. His is name is Basie. He works and they live on Vrede. Assie has a little brother and sister.

It is eleven years now. She runs the cheesery. And her mother helps out every now and then.