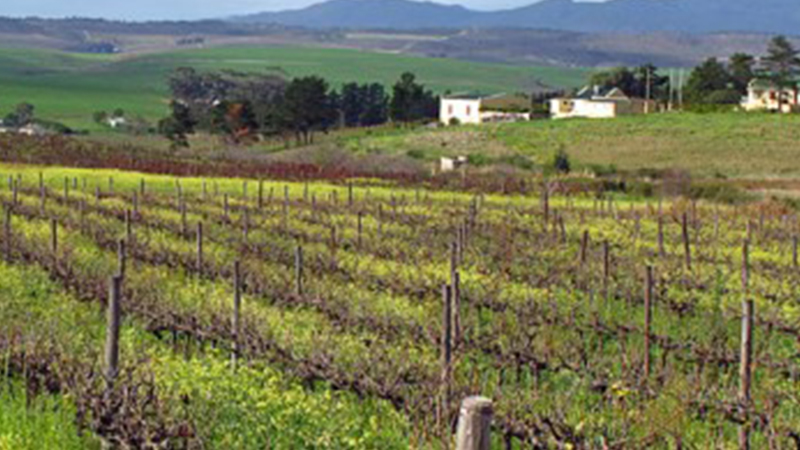 The biggest challenge to the Bot River harvest is usually the birds that swoop in to feast on the flavoursome grapes. We don’t mind the odd feast, if only they wouldn’t messily pick here and there and damage so many grapes! This invasion aside, Bot River’s harvest in 2009 was a superb one, and began on an auspicious date – Feiteiras winery brought their first grapes, the interesting Verdelho variety, to the cellar on the 2nd February, the exact date of South Africa’s first wine harvest an incredible 350 years ago!

The preceding Bot River winter was long and cold and spring lingered coolly, which is fantastic for the long, slow ripening that creates good flavours. We actually had quite a bit of late season rain, and even experienced a flash flood in November which saw the rivers raging – Beaumont lost a few vines to the water, as well as many pear trees.

The cooler weather meant that most of the white wine varieties were harvested up to two weeks later than the norm, and winemakers report great quality with the whites. Barton and Beaumont consider the 2009 Chenin to be exceptional, while Eerstehoop Winery harvested great chardonnay and Gabriëlskloof and Wildekrans brought in fantastic sauvignon blanc.

A little later in the season, the heat finally arrived, and elsewhere in the Cape savage fires caused damage to vineyards, but Bot River escaped this terror. Now the grapes began to ripen in earnest, and the red varieties arrived at the cellars. Happily Bot River winemakers report good red grape quality across the board, singling the Shiraz out for special mention. Berries are small and flavours are great. There were a few challenges later in the season as the heat really sunk in; as Johan Mendelsohn rhymes: “He who makes wine at temperatures like red hot twine, rather go and dine, don’t be one of mine…”

A sure sign of the area’s wine-making potential is the fact that three brand new cellars were christened for the 2009 harvest. Neils Verburg, his head shaven as per his harvest custom, brought is Luddite Shiraz into his new facility, naming challenges “no equipment or stairs” – in true Luddite fashion. Eerstehoop painted their new cellar red and were very happy with its performance, the space finished in the nick of time. The region’s largest new cellar is at Gabriëlskloof, a beautiful state-of-the-art facility. New to the valley, Gabriëlskloof winemaker Kobie Viljoen is ecstatic about the new cellar but even more about the Bot River grapes: “The grapes from this harvest show analytics that I have not seen in my 11 years of making wine in South Africa. I can’t wait to bring these wines to the market!”